Only one big lie from Michael Medved today...

Today's show was fairly focused on politics, and not so much on policy, so it was nice to hear subjective analysis, not the stream of misinformation that we have become so accustomed to.  Nevertheless, there was a particularly egregious piece of misinformation today that has been so thoroughly debunked previously, I can only assume you know you are lying when you say it.

Michael Medved: "The CBO estimates that at least 20 million Americans are going to be thrown off their employer insurance"

I chuckled when I heard this, because I've heard you use the "20 million Americans" line before, but never modified with "at least".  This takes the misinformation to an as yet undiscovered form of misinformation, and worse, you are telling your listeners the CBO says it.  It's one thing to say something is true that you know to be false.  It's another to misrepresent the words of others, especially when you know it is false.

The original CBO projections for the ACA projected the following:

On balance, the number of people obtaining coverage through their
employer would be about 3 million lower in 2019 under the legislation,
CBO and JCT estimate.

The current CBO projections for the ACA project the following: 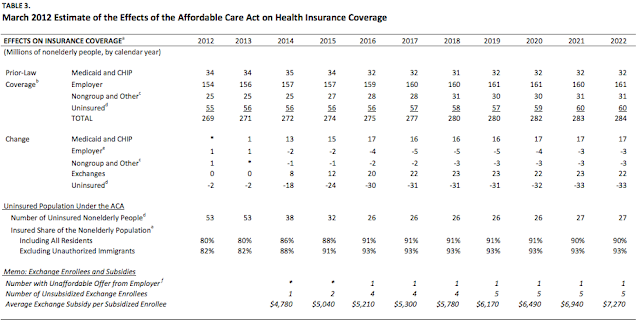 So, stop utterly misrepresenting the CBO, Michael.  It's dishonest and disgraceful.