Second in my ongoing series to set Michael Medved straight!  We've already made some progress - yesterday he corrected the 3.8% surtax on investment issue thing I had in my last post.

I'm going to try to do this as often as I can, because I really hope you will stop spreading misinformation.  I noticed yesterday that you set the record straight on the 3.8% investment income surtax in the ACA.  If only you had done that when Michele Bachmann was on.  :(  But better late than never, I suppose! :)

Michael Medved: "...because I actually think a bill in Louisiana, it would have done something very simple.  It would have barred all ATM cash withdrawals with welfare debit cards that attempt to use the cards in ATM machines in strip clubs or to use those cards to buy liquor or cigarettes. And it would ask people in stores to try to enforce that.  Is that so unreasonable?"

It doesn't sound unreasonable.  Unfortunately, that's not what the bill actually did.  Given your specificity on liquor or cigarettes, I presume you are referring to Louisiana House Bill 95.  That bill reads:

A.  Notwithstanding any federal law, regulation, or rule to the contrary, the department shall develop and maintain such policies as are necessary to ensure the following:

(1)  That no FITAP assistance is used in any transaction in a gaming establishment or sexually oriented business.

(2)  That no FITAP assistance issued on an electronic benefits transfer card is drawn in the form of cash from an automated teller machine or a retailer.

(3)  That no FITAP assistance is remitted at any retailer for the purchase of any of the following:

B.  Nothing in this Subpart shall prohibit the remittance of FITAP assistance for the purpose of obtaining a cashiers check, certified check, or money order

Notice subsection 2.  This bill would have prohibited those on FITAP from getting cash from any ATM machine.  It is not limited to cash machines at strip clubs.  This bill would have meant no cash for any TANF recipient, although they could go buy a money order at a bank, and then trade the money order for cash at a bank.  People on welfare need cash sometimes to take busses, buy food, give their children $5 for their birthday, just like people who aren't on welfare.


Were you just misinformed on this one?  It sounded like you were describing a USA Today article, but that article didn't make the claims you did.

In Louisiana, a stalled bill would have barred all ATM cash withdrawals with welfare debit cards and use of the cards in strip clubs or to buy liquor or cigarettes.


Michael Medved: "..the message is profoundly dishonest.  You know when he talks about 18 million hard-working American families?  That are going to see their taxes go up under Romney's plan?  It's not that taxes go up. It that you get less of a welfare check.  We have a welfare program that is called the Earned Income Tax Credit, which is not that.  It's a check.  It's sending money to people."

It's actually more than the Earned Income Tax Credit.  It is comprised of three different credits:

The American Opportunity Tax Credit raises the maximum education tax credit from $1,800 to $2,500 and it makes the credit partially refundable so low-income people who don’t pay any taxes would still benefit.

The stimulus bill also increased the Earned Income Tax Credit for low-income working families from 40 percent to 45 percent. An extension enacted in 2010 increased the maximum credit for families with three or more children from $5,236 to $5,891 in 2011.

The child credit, a tax benefit to offset the cost of raising a child, is a partially refundable credit of up to $1,000 per child. Recent legislation lowered the threshold for qualifying, so that working families with earnings above $3,000 qualify for at least a partial credit.

The Tax Policy Center said Romney’s plan would raise taxes on about 11 percent of  tax filers (or those too poor to file and pay taxes) by an average of about $900 in 2015. With 165 million filers in the U.S., that’s about 18 million people, as Obama said.

As Politifact points out, it is possible to qualify for these credits and still owe taxes, so for those who claim these credits and still owe taxes, this will be a tax increase, not a welfare program.  The commercial stated Romney's tax plan would raise taxes on 18 million people.  It raises taxes on 18 million people.  Therefore, it's not "profoundly dishonest."  If Barack Obama waved a magic wand and removed the home mortgage deduction for people making over $250,000, Republicans would call it a tax increase.  Actually, they would probably call it the largest tax increase in the history of the universe, sadly.  :(

Michael Medved: "The Republican argument is this, Donald.  It is the wrong step, because it won't reduce the deficit.  And by the way, we know this historically. Virtually every time that a tax increase has been passed, the immediate reaction has been increases in spending."

This is untrue.  This has been studied at some length, and Cato found compelling evidence that the opposite is true.  From the Cato study: 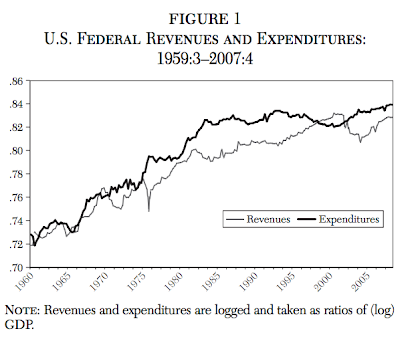 The existing literature uniformly imposes symmetry on revenue effects in expenditure equations. This constraint may bias results toward the conventional tax-spend hypothesis because it is based on simple adherence to a budget constraint. In contrast, the fiscal illusion hypothesis—based on the public’s subjective perceptions of the cost of government spending—is more plausibly associated with asymmetric responses. For example, individuals may be more sensitive to tax increases, seeking to assign blame for those shocks, while tax decreases are more passively accommodated. This may be due to irrationality, but not necessarily. Tax decreases (relative to spending) create future tax liabilities that may or may not be paid during the individual’s lifetime. Tax increases, on the other hand, are realized with certainty. Also, an insensitivity to tax decreases relative to increases is consistent with the loss-aversion hypothesis put forth in the prospect theory of Kahneman and Tversky (1979, 1991).

For advocates of reining in an expanding federal government, the results here do not provide strong support for “starve-the-beast” type of policies. Perhaps counter-intuitively, the findings suggest that tax increases—even temporary—may serve to decrease expenditures by forcing the public to reckon with the cost of government spending. The findings suggest that the electorate has to be clearly presented with the bill to recognize the cost of government, rather than being allowed to run up a tab.

Bruce Bartlett has also written about this at length:

Unfortunately there is no evidence that the big 1981 tax cut enacted by Reagan did anything whatsoever to restrain spending. Federal outlays rose from 21.7% of GDP in 1980 to 23.5% in 1983, before falling back to 21.3% of GDP by the time he left office.

Rather than view this as refutation of starve the beast theory, however, Republicans concluded that Reagan's true mistake was acquiescing to tax increases almost every year from 1982 to 1988. By the end of his presidency, Reagan signed into law tax increases that took back half the 1981 tax cut. His hand-picked successor, George H.W. Bush, compounded the error, Republicans believe, by supporting a tax increase in 1990.

When Bill Clinton became president in 1993, one of his first acts in office was to push through Congress--with no Republican support--a big tax increase. Starve the beast theory predicted a big increase in spending as a consequence. But in fact, federal outlays fell from 22.1% of GDP in 1992 to 18.2% of GDP by the time Clinton left office.


Although all of evidence of the previous 20 years clearly refuted starve the beast theory, George W. Bush was an enthusiastic supporter, using it to justify liquidation of the budget surpluses he inherited from Clinton on massive tax cuts year after year. Bush called them "a fiscal straightjacket for Congress" that would prevent an increase in spending. Of course nothing of the kind occurred. Spending rose throughout his administration to 20.7% of GDP in 2008.

Michael Medved: "And by the way, nothing about voter suppression?  Why is that?  Because there is no voter suppresion. It's an absurdity.  And the claim that the Legal Defense Fund of the NAACP... They claim that 24% of all African American adults have no form of government ID.  It's ridiculous on its face.  You know that it is.  They know that it is.  And the claim... by the way, if that is true, then the NAACP should drop everything to get people some kind of ID."

Actually, it is true.  The same study found that 8% of white adults did not have some kind of government ID.  There have been several studies on this, and almost all of them found a much larger percentage of blacks without government-issued ID.  You can read about it here at Politifact:

That figure came from a national survey taken about six years ago and, far as we could tell, mostly unchallenged since. While other collections of data do not touch on exactly the same point, most indicate that African Americans are less likely than whites to hold varied kinds of government-issued IDs, with percentages of blacks without such ID ranging from nearly 4 percent to more than 26 percent.

From this, we can conclude that voter ID laws will, ipso facto, result in disenfranchisement of a disproportionate number of minorities.  There are many hurdles to overcome for poor and remote citizens before they can get a photo ID.  Texas has 600,000 voters without government ID.  Consider a resident of rural Texas, who lives 176 miles away from the nearest DMV.  This resident is poor, and he does not drive a car.  Last election, he could walk to his local polling location, cast his vote, and get on with his life.  With a voter ID law in place, he will have to come up with $22 for a copy of his birth certificate (this is effectively an illegal poll tax,) send away for it, and then once he has that birth certificate, procure travel for 176 miles and back again, all in a quest to exercise his constitutionally protected right to vote.

The real question on voter ID laws is - why?  What problem are we trying to solve? What evidence do we have that voter fraud has occurred?  The Bush Justice department led a 5-year investigation intended to clamp down on voter fraud.  By April, 2007, 120 people had been charged, and 86 had been convicted of voter fraud.  Most of those convicted had government-issued ID, but were voting illegally, such as felons who were unaware they were ineligible to vote, or permanent legal residents who were unaware they were ineligible to vote.

So even if the 86 convicted by the 2007 task force disenfranchised 86 others by canceling out rightful votes with fraudulent ones, would that compare to the disenfranchisement of any percentage of 600,000 Texans?  If 1% of Texans could not afford the cost or time it took to get a government ID, 6,000 people would be denied their right to vote, not by shady vote fraudsters, but by the State of Texas.  I don't understand how implementing a system that will guarantee disenfranchisement for thousands is superior to coping with the extremely rare incidence of voter fraud we have today.

I can give you a different motivation for these voter ID laws, Michael.  You have been strident on the issue of appealing to minorities, while many others in the party have been coy on this point.  GOP outreach to minorities is far less now than it was under George W. Bush.  Your argument to Republicans has been - "There is no future for an all white party.  It will go nowhere." I completely agree with you on this.  However, more cynical Republicans are dealing with the problem in another way.  Once they had realized the large percentage of minorities without government ID cards, they saw an easy way to preserve electoral power, and that was by passing laws that create hurdles that affect non-whites disproportionally.