Crushing disappointment, and a challenge accepted!


As I pressed play today, I was hopeful that of all people in the conservative entertainment establishment, you would resist the temptation to smear the President.  Initially, I was happy; it seemed like you wouldn't go there.  But then, in the second hour, you went there:

This is why we can't have nice things.  You spent a lot of time teasing out what you think the President is implying, but your listeners would be better served if you had just read the speech, or listened to it, or read the paragraphs surrounding that paragraph.  Had you done that, you would see that the President is clear:  Business can only be successful when there is a government to build the infrastructure and services to support it.  All that nonsense you said is just nonsense, Michael, and I know you know better than this.

You didn't spend much time on it, so I suppose you were just saying it to appease whoever wanted you to be "on message".  Next time, read the context before misleading your listeners.

Michael Medved: Let me cite the Tax Policy Center which is from the Brookings Institution.  It's a liberal source.  They have here a table, table T12-0039.  Romney tax plan based on current law.  Right?  If Romney's changes come into practice, every single quintile of the populace would pay less in taxes.  That's what they have written down here.   Now, is there any basis at all for suggesting that Romney wants to increase taxes on those earning below 40,000?  Absolutely not.  It's just a Democratic partisan smear.  And I would challenge anyone, by the way.  Come forward with some proof for this stupid smear.

Oh, I'm actually happy you misinformed everyone about this, because it's something you say every single day.  About how wonderful the world will be when we simplify the tax code, cutting out loopholes and carveouts and doo-dads, etc., etc.  Lower the rates, broaden the base, simply everything!

So first, I am going to point out where you misled your audience.  You read the subtitle of the table, but skipped the title.  Why would that be?  Oh yeah, it demolished your point.  The title of that table is:

Oh, where is the Romney Tax Plan With Specified Base Broadeners?  It doesn't exist, because Romney hasn't specified them.  The Ryan plan didn't specify them, either.

But there's a logical reason you are wrong, as well.  You pointed out that every single quintile pays less taxes under the Romney plan.  But if that were true, then the Romney plan would fail to increase revenue.  In fact, it would increase the deficit by $900 billion dollars.  Someone has to pay more than what is on that table to make up the $900 billion difference before we would break even.  But who?

There are hundreds of tax expenditures.  Pew has a pretty cool database that you can browse at your leisure.  Let's focus on the top ten, though.

Do you think we could get rid of the tax deduction for employer-sponsored health insurance?  How about the mortgage interest deduction?  Get rid of 401ks?  If we declared only those three as sacrosanct, and got rid of everything else, we would increase the deficit by $100 billion.  Immediately.

According to a 2012 Congressional Research Service report, it is not realistic to expect that any more than $150 billion in tax expenditures could be stripped from the tax code.  This would allow us to reduce the top tax rate by about 2 percentage points, for it to remain revenue neutral. 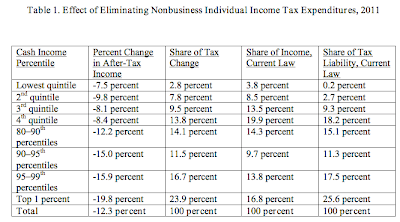 Everyone would see an increase in their taxes, in every quintile.  That was the point, remember?