We have explored what thought reform is not in Mind Control 101: Myths of Brainwashing.  But what is it? What force can shut down people's minds and get them to do things they otherwise would never consent to?

No one is immune from mind control.  And contrariwise, mind control doesn't always work. It takes the right combination of factors; specifically trust, common ideals, and receptivity.

Cults are a good place to study mind control because the changes they effect on people's lives are extremely obvious.

Pretend for a moment you are having a difficult time in your life: a recent tragedy or major transition.  Maybe you've just gone through divorce, lost a loved one, you've moved to a new town, or have recently been fired.  You're feeling alone, scared, depressed, ashamed, or desperate.

One day you encounter someone who is nice to you.  Either it's a friend or associate, or even a complete stranger.  Maybe it is someone handing out pamphlets, or speaking to a crowd.  Who ever it is, he has kind eyes, and you feel a little better when you're around him.  He also seems to share your values.  Maybe he wants to help the poor, or he talks about the power of love, or God, or protecting animals.  Imagine your greatest value, and he also shares that value with a level of passion you admire.

He invites you to a meeting or a party.  Once there, you find a room full of people who say nice things to you, lifting your spirits.  They are involved in a cause you wholeheartedly endorse.  They take care of the sick or collect food for the poor, or educate kids about capitalism, or share the message of God to the world.

Being around these people makes you feel good.  You feel as if you belong.  You quickly forget your personal problems and begin spending more time with this group, working towards making the world a better place.

They have won your trust.

Now you are fairly receptive to what the leader may tell you.  He will use this time to win more of your trust and make you more receptive.  If you've had niggling doubts about your new friends or their beliefs, they are easily explained away.

Slowly, you are introduced to new ideas you may not have accepted at first.  Over time, more is required of you.  More money, more time, more sacrifices.  Your behavior is slowly restricted.  Maybe you are required to dress a special way, eat or not eat certain foods, show up at a certain number of meetings, be so busy you don't get proper sleep or nutrition.

Now the grip tightens.  The leader teaches you doctrines to instill phobias about the outside world.  You learn that your group has many enemies to fear.  Those enemies are not to be listened to because you will be unable to resist when they try to lead you away from the love of the group.  You are given thought-terminating cliche's, phrases or words that help you easily dismiss criticism.  You are elite, one of the chosen to help save the world from political error, or one of the blessed of God.  Your very language is altered, as your words become "loaded". This prevents you from properly thinking about certain concepts, and from properly communicating with people outside the group.  You have become dependent upon the group for your emotional well-being, and you are possibly even physically or financially dependent.  You are isolated, if not physically, then mentally, because there are many sources of information you are taught to distrust.

When you think about the group and its teachings, you are filled with a sense of euphoria.  Thinking about outsiders or criticisms makes you feel anger or confusion.  The thought of leaving the group or "switching sides" makes you feel guilty, ashamed, or afraid.  If something is not going as promised, you blame yourself, not the group.  There are no gray areas left in your world view -- things are either good or evil, left or right, pure or tainted, full of life or death.

You now automatically reject any criticism, no matter how valid it is.  You reject any fact that goes contrary to your beliefs, because your beliefs have become more important than reality.  Certain words are now triggers that cause you to reject specific ideas before you even have a chance to hear them out.

You feel yourself to be perfectly rational, far more enlightened or intelligent than those with opposing views.  Yet instead, your brain has been crippled from the mind viruses you voluntarily made part of you.

Here is the process:

Sometimes people just seem really trustworthy because they are kind, charismatic, or because everyone else also trusts and loves them.

You probably feel very passionate about your beliefs, so it's easy to involve you on this level. It's also another way to win trust.

3. Create a state of emotions and receptivity

Once your defenses are down, there are many techniques for turning off your critical mind and putting you in an emotional state. There you are more willing to believe anything. Emotions may include fear, anger, idealistic euphoria, camaraderie, love, or any other strong emotion.

4. Slowly introduce new ideas and restrictions on thoughts and/or behavior

These are ideas or restrictions that dehumanize opponents, instill fears of the enemy, introduce thought-terminating cliche's, create loaded words, give you feelings of elitism or of being special, and so on.   This is the point at which you become tangled in the lie and become a perpetuator of that lie using the same techniques used against you.

It's How We're Wired


You don't have to be a full member of a suicide cult to be manipulated.  Mind control techniques are used every day: in the news, in commercials, in political speeches, on billboards, on the radio, in forwarded emails, and in conversations. Even abusive relationships practice the same manipulative methods.

We are always being asked to trust someone who wants to tell us who to fear, when to shut down our brains, who's side to never respect, which facts are skewed and which are true.  We are asked to immediately reject everything we disagree with and accept everything we agree with without question.

[caption id="" align="alignleft" width="248" caption="There used to be a lot more bowing and scraping. Those prone to backtalk were usually beheaded."] 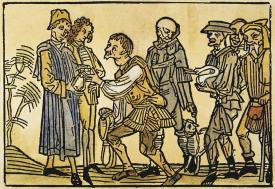 This process seems to be the rule rather than the exception.  Our society now values free-thought, intellectual honesty, and persuasion through facts and reason, but this has not always been so.  For most of history, mankind has blindly followed authority.  Arguably, civilization might not have survived this far without these traits. Certainly, rebellious, contrarian individuals in those cultures didn't survive long. Our minds seem prone to accept deceptive persuasive processes that bypass critical thinking. The tendency towards free thought was literally bred out of us.

It's actually hard work to employ honest persuasion. We have to risk the discomfort of cognitive dissonance, which seems ever present in the harsh light of honesty. Our very brain chemicals make us unhappy when we critically question cherished beliefs.

Conversely, coercive persuasion is a much more comfortable process, but it always involves deception.  Typically such persuaders believe the lies they tell.  Followers of these distortions are just repeating the program, including mind control methods, they have been taught.

Who Can I Trust?

Ironically, you are actually more likely to be brainwashed by those you least expect to be capable.  These will be people you fully trust, people with similar values and goals as you, someone who is on your side.

Think about that for a moment.  The groups you might suspect most capable of mystically infecting your mind with deceit are actually the most incapable.  Those you believe to be benevolent are those most capable of deceiving you, if they so choose.

There are members of every camp, every ideology, every school of thought who have used the powers of deceptive thought reform.  Out there, somewhere, is a controlling group or belief system that is likely to appeal to you, that has the power to hook you and reel you in.  It's even possible, likely in fact, that it's already happened to you to one degree or another.

When we're born, we are about as helpless and dependent as we ever will be. We start out being programmed by our parents.  In most ways, this is a good thing, because this is how we learn basic survival, how to behave in society, and how we gain culture and language.  We learn useful values and principles.  But we also come to blindly accept many untruths and thought patterns that keep us from critically thinking or asking questions when maybe we should.


We also become susceptible when the world itself becomes terrifying.  There are many things to fear: War, terrorism, disease, crime, violence, immorality, anarchy, socialism, racism, tyranny, oppression, and so on.  Many will stand on podiums or behind TV screens and amplify those fears, and then promise to ease them if we but trust them.  This isn't much different from when a cult targets someone who has had a recent loss in their lives.

I have been brainwashed about some things.  I still am, to some degree, even though I am aware of these techniques and do everything I can to spot them.  But when someone is "on my side", saying things I already tend to agree with, I'm just a little susceptible.  And so are you.

Ultimately, you can only trust yourself.  That is why questioning and critical thinking are so important.  If you can become comfortable with cognitive dissonance and ok with being wrong, your mind becomes agile.  If you learn good research techniques, you make yourself the ultimate authority.  If you teach yourself rational habits and learn about the difference between good logic and fallacy, you can give yourself a built-in bullshit detector.  If you study mind control techniques, you shield yourself with awareness to disarm the lies.  Trust yourself and become the guardian of your own mind.

In future Mind Control 101 posts, I will explore each of the known mind control techniques in detail, describing exactly how they work to entrap us.  I will also explore cognitive theories that explain why and how our brains cling so desperately to what we already believe, easily rejecting conflicting data.